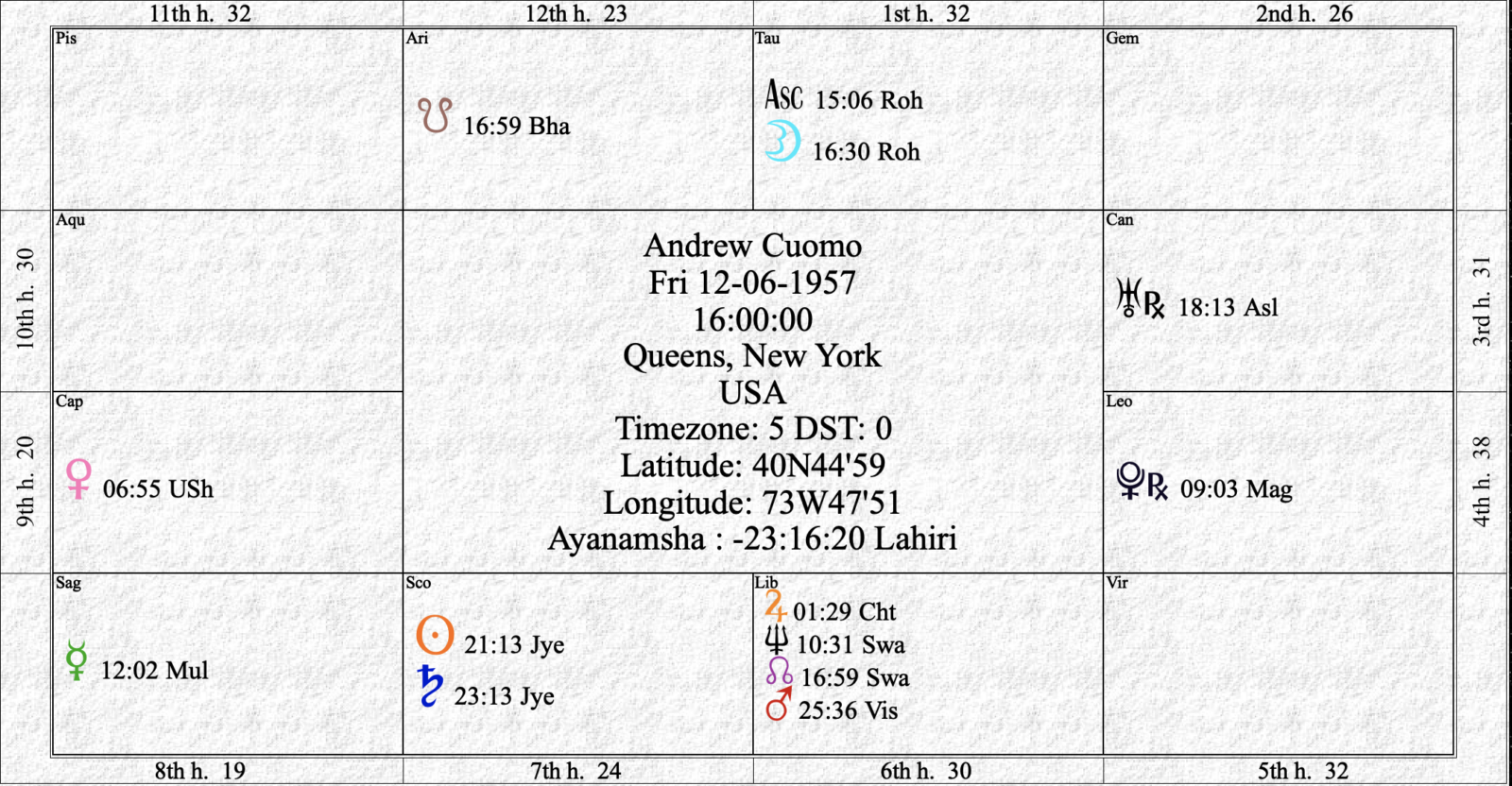 Many know who Andrew Cuomo is as he has been in the headlines as the Governor of New York state not only for his recent resignation but also through the COVID pandemic. He is a lawyer and author. He has been under investigation for sexual harassment. On August 10, 2021 he announced his resignation effective August 24, 2021.

Andrew was born on December 6, 1957 in Queens, New York. There is not a known time of birth so we will be using the Moon as his ascendant and first house.

Let’s take a look at his chart and see what his life promises.

His Moon is in Taurus. This makes his Moon exalted. With the Moon in the first house this can indicate that his life will have many unpredictable turns and events. He can have constant changes in daily activities. He can have an abundant life but can have unbalanced spending. There can be times where he is frugal and times where he is extremely lavish. He can be prone to mood swings. He is someone who is popular but is also progressive. He is able to influence others and able to get their respect. He can be stubborn. The Moon rules his third house indicating that he is adventuresome and courageous. He is successful through his own efforts. He can be skilled at sales and be very persuasive. He is a good speaker and has a very competitive drive. He may not always take the best care of his own health. He has the potential to get into trouble through writing and others means of communication. Venus rules his first house and is in his ninth house indicating that his father could be a powerful influence in his life. He can have good finances and get support from his father or other authority figures. The Moon is in the lunar mansion Rohini. This indicates he is charismatic and a good communicator. He has an inner strength. But he can be a smooth talker which could sometimes get him in trouble. He could be viewed by others as being deceptive or as a manipulator. He has a love of luxury and the finer things in life.

In his sixth house, Libra, are Jupiter, Rahu and Mars. Mars and Jupiter being in the same sign can indicate that he is driven to attain a good education and positions of leadership. Mars in the sixth house indicates his drive and ambition. Employees and coworkers can be a problem for him and cause mishaps or legal problems. It gives him executive abilities. He is able to make decisions quickly. He may drink to help him slow down and relax. He can be reckless so will need to make sure he fully thinks through decisions. Jupiter in the sixth house indicates a desire to help others. He likely has humanitarian efforts that are near and dear to his heart. He earns his money through fields related to service. He can have the potential for legal problems. Rahu in the sixth house allows him to think of creative solutions to problems but he will need to ensure they are ethical and moral. He is able to meet opposition with courage and determination. He can be quick to pick a fight. He is able to rise to the top of his chosen profession but there can be problems around coworkers and employees that cause conflict. Mars rules the seventh and twelfth house and in the sixth indicates that he can have conflict and struggle within marriages or relationships. This placement can also bring the ability to win legal battles. He can have problems getting help from others. Jupiter as ruler of the eighth and eleventh in the sixth indicates that friends and associates come through work. Jupiter ruling the eighth in the sixth does show that he needs to be cautious around issues of sexual harassment in the workplace. He does have the ability to prevail over his problems and come out ahead.

Jupiter is in the lunar mansion Chitra indicating he can have skills in business. He is someone who will always be well dressed and groomed. He can be drawn to serious subjects of philosophy and social thought. He possesses charisma and charm. Rahu is in the lunar mansion Swati indicating again that he can be a businessman. He has self-determination and is blessed with the art of communication. He is someone that needs to think before acting and is more intelligent than he may appear to most. He has to be cautious as people can try to take advantage of him. Mars is in the lunar mansion Vishakha indicating that he is clever and determined. He is someone who can benefit through marriage and traveling. He has the ability to concentrate on his goals and overcome obstacles. He is extremely competitive and won’t give up until he has achieved his goals. He needs to be cautious as he can force his will and ideas on others, making it important that he listen and think things through. He is someone who can be very nice until he gets what he wants and he may step on others to get his way.

In his seventh house, Scorpio, are the Sun and Saturn. Sun in the seventh house indicates that his spouse could be controlling and have high demands on his attention. He will have more success in business when he is willing to delegate to others. He is someone who is supportive of his partner. He can benefit through government contracts. He can have a strong will. He can sometimes be cruel and take from others without returning the favor. Saturn in the seventh house can indicate that marriage takes a serious role in his life. It could indicate a partner that is powerful but cold or detached. This placement can give marriage longevity. He can have unemotional interpersonal relationships. It can indicate he will get very focused on getting results. He can be analytical and have a powerful focus. The Sun rules his fourth house and being in the seventh indicates that he can get emotional support from partners. Saturn rules his ninth and tenth house indicating that he can get advantages from being married and being in a partnership. He knows how to relate well to others. He can be good at diplomacy. He has the ability to talk to anyone about anything. He will need to be cautious when socializing or the wrong situation could hurt his career. He has a preference for work that is regulated and predictable. He can have a dislike for authority figures and those trying to tell him what to do. The Sun and Saturn are in the lunar mansion Jyeshta. This indicates he can be the most successful in his family. He is able to keep friends and build a good support network. He is driven for power but can be very impatient under the surface. He can come across to others as being arrogant and hypocritical.

In his eighth house, Sagittarius, is Mercury. Mercury is the only planet that prospers in this house. He can have a quick mind and good research abilities. He can hold people to the letter of the law. He enjoys learning and can be a good writer and speaker. He can be oblivious to the downside of situations. He may at times think too much of his own point of view and will need to work at seeing others points of view. Mercury rules the second and fifth house and being in the eighth house indicates that he may enjoy fantasy or science fiction. Financial income can come from other people’s money. Mercury is in the lunar mansion Mula. This can indicate his having a very passionate nature with a desire to get to the bottom of things. He can have the potential to get caught up in blaming others or his environment. He can be skilled at persuading people to help with his goals and objectives. He may sometimes tell people what they want to hear in order to get his way.

In his ninth house, Capricorn, is Venus. This can indicate that blessings and money come from the father. He has the ability to relate well to others. He can receive help from his father or other authority figures. He can be published. There can be a chance of his facing legal complications with this placement. He can prefer more mature partners. He can have a love of solitude. He is likely to be helpful to the poor and those deemed as underdogs. Venus rules his sixth house in the ninth indicating that he can be a lawyer. Working for his father could be stressful. Venus is in the lunar mansion Uttara Ashadha. He can be a devoted friend. He can enjoy reading to gain knowledge. He can have multiple marriages or marriage like relationships.

In his twelfth house, Aries, is the node of the Moon, Ketu. He is able to respond quickly to events with the capacity to make sudden changes. Unusual or sudden events can come up in his life. He can have erratic spending habits. Ketu is in the lunar mansion Bharani indicating that for him struggles and obstacles will result in personal breakthroughs. At times he is likely to feel oppressed by others. He can desire new experiences. He will stick by family and friends.

Let’s look at what transits triggered his marriage with Kerry Kennedy.

Andrew Cuomo married Kerry Kennedy on June 9, 1990. At the time of their wedding Jupiter was transiting in Gemini. It was sending its energy to the ruler of his seventh house of relationships, Mars, transiting Saturn was in Capricorn also sending its energy to his natal Mars, ruler of his seventh house of relationships. With this Saturn energy it indicates a marriage that was based on security. At this time, he was in his Jupiter Maha Dasha and Saturn sub-dasha which made this time more powerful for him. Transiting Venus was in Aries in opposition to his natal Rahu which can be one indication of a relationship. With transiting Venus in Aries it was also in opposition to his natal Mars which makes for a love connection.

Saturn transiting his ninth house sending its energy to his sixth house could be playing a part in triggering his current legal troubles. Since Saturn is in the twelfth house from his tenth house of career, it could show the ending of his current career.

We will watch and see how this unfolds for him and his life.