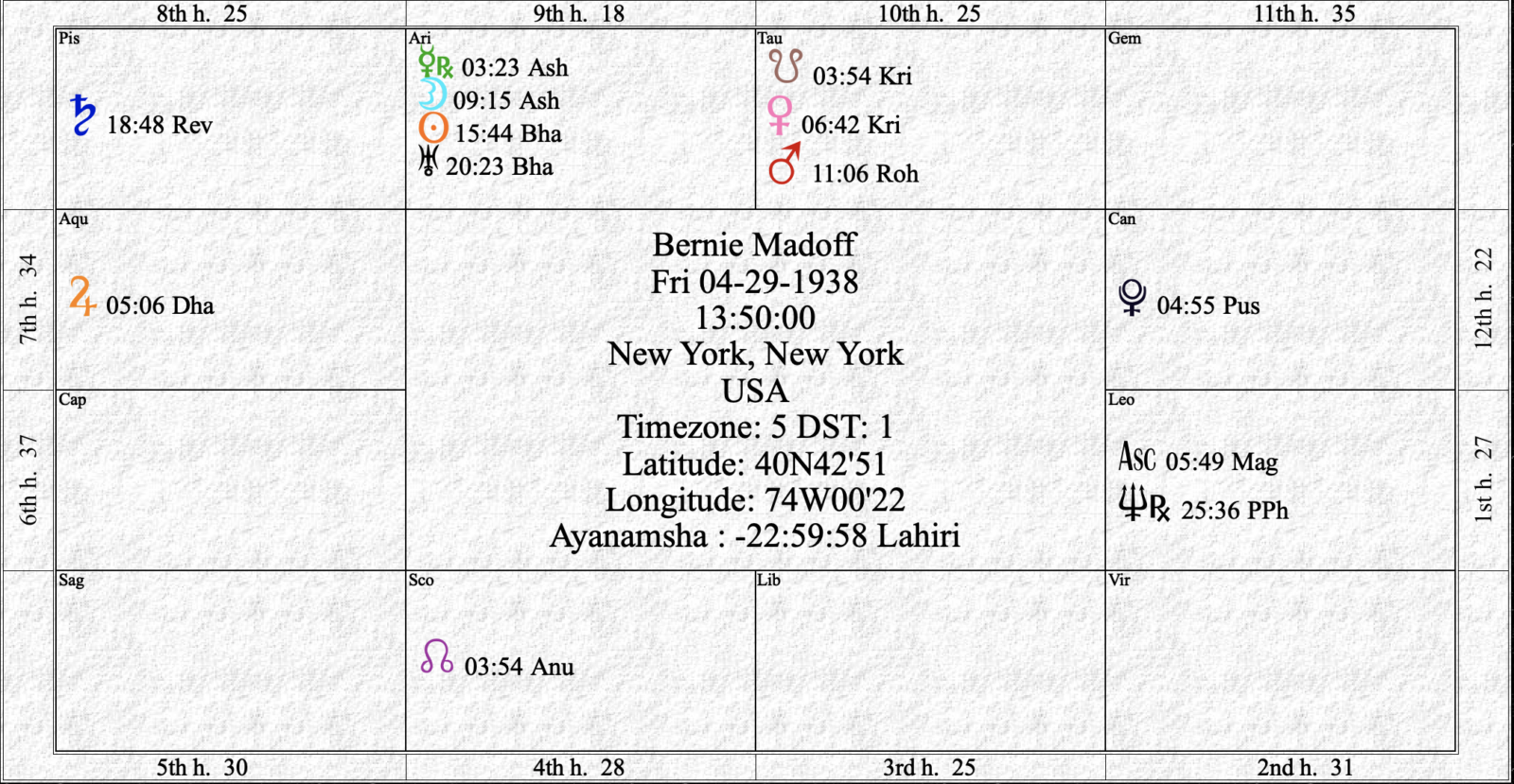 Well now here is a name that we all watched splash across the headlines! Bernie Madoff was an American Financier who was convicted of running the largest Ponzi scheme in the world. He was born April 29, 1938 at 1:50pm in New York, New York. The scheme was worth about $64.8 billion. His sons, Mark and Andrew, turned him into the authorities after he shared with them that everything was a scheme. He was sentenced to the maximum 150 years in prison. He passed away in prison on April 14, 2021.

Let’s dive into his chart and see what it gives us.

His Ascendant is in Leo. This becomes his first house. He only has Neptune here which could indicate that he is delusional and could be good at talking himself into things being ok. His ascendant is in the lunar mansion of Magha. This is known as the lunar mansion of leadership – those people that become known. He enjoyed the finer things in life and wanted to go first class. He enjoyed gaining praise from others and being served and given attention. He could be arrogant and egotistical which could cause issues if he didn’t watch out. He was someone that had a strong drive and desire for power and wealth. Mix this in with Neptune being in the lunar mansion of Purva Phalguni we can see his ability to communicate and influence others through illusions and false information. He was someone who could be reckless and focused too much on getting what he wanted.

I want to note at this point a critical yoga that is in his chart. Bernie has a kala sarpa yoga. All of his planets are on one side of the nodes of the Moon – Rahu and Ketu. This yoga indicates that the highs in life can be high but that the lows are low. This is a powerful yoga that really gives a life fated by events.

In his fourth house, Scorpio, is the node of the Moon, Rahu. This is an interesting placement as it can indicate that Bernie had the ability to make money through subtle or hidden activities. He is someone that was focused on material growth. He could get angry easily and be viewed as self-serving. Heart problems are something he would have needed to be aware of in his chart. Rahu is in the lunar mansion of Anuradha. This can make him outwardly buoyant, popular and someone who enjoys social events and organizations. The ruler of this house Mars goes to his tenth house of career. This can indicate that he could be good with real estate. It can indicate that he had the ability to build up others emotions.

In his seventh house, Aquarius, is Jupiter. Jupiter here can give a powerful partner. Children were an important aspect of his marriage. He was someone who could attract a good partner. He was learned and an interest in creating fortune-building businesses. He likely desired wealth without wanting to put the true effort in to make or receive it. He could be prone to a weak back and kidneys. There could be the potential for him to earn money through other people’s support. He could be organized, clear and convincing. He had good political skills. This can also indicate the need to watch his heart. Jupiter rules the fifth house and being in the seventh house can indicate that his partner could be talented and successful in life with many friends and associations. He can have a good marriage. This also indicates that he would form contracts and agreements related to speculation. The ruler of the seventh house, Saturn, is in the eighth house. This can indicate that marriage would have been something he needed to work on at times. Jupiter is in the lunar mansion Dhanishta indicating that Bernie was a man who believed in charitable giving and could be a great conversationalist. He was motivated but could be deceptive and withhold information or understate matters. He could be prone to becoming greedy, narcissistic and self-absorbed.

In his eighth house, Pisces, is Saturn. This is interesting as Jupiter and Saturn are in a parivartana yoga. What this means is that these planets will act as if they are each in their own sign of rulership. This is very powerful. Saturn here can indicate a longer life. He was 82 at the time of his death. He kept secrets but also could keep confidences for others. He could abandon or disappoint others in life. He could understate problems so that others did not understand the true depth of an issue. Saturn rules the sixth house and being in the eighth can indicate Bernie having many acute illnesses throughout his life that could be hard to diagnose and therefore turn into more serious and chronic diseases. He was someone who would need to have used care and caution around the workplace as he could be prone to lawsuits.

In his ninth house, Aries, are Mercury, Moon and Sun. Sun here indicates that his father may have been overbearing and controlling. Bernie may have sought out a career in law at some point. This can indicate getting into legal entanglements. He was ambitious, took initiative and a sharp thinker. He was capable of achieving fame (doesn’t always mean fame is good). He likely had times where he was irritable and could potentially have had issues with overheating, fevers or rashes. Moon here can indicate that he had public success was intelligent and did love his father. He could be generous. He could be agile and may have enjoyed living spontaneously. He was someone who made quick decisions and could have a youthful appearance. He was not someone who wanted to take advice. Mercury here can indicate that travel for work was a part of the job. He could have the potential to get into trouble with authority figures. He was a quick thinker, clever, a quick problem-solver and had a mind that wanted to keep pushing forward. At times he likely only thought of himself, his needs and his approach. He was prone to being overly speculative or risk taking. With the Sun Mercury conjunction he would need to be mindful that he didn’t get too clever. He could keep his mind focused on the budget/ money plan. Mercury and the Moon are in the lunar mansion Ashwini. This indicates a zeal and zest for life but also that he had a very restless and impatient nature; rushing off without planning ahead. He could be stubborn but also self-sufficient. He enjoyed dressing well. He was someone who very much wanted to do things his own way. The Sun is in the lunar mansion of Bharani. This indicates that he will face struggles and obstacles that result in personal breakthroughs and personal transformation. He is someone that could feel oppressed by others or restrictive laws placed on him. He would stick by his family but could be too cleaver or calculating.

In his tenth house, Taurus, are Venus, Mars and the other node of the Moon, Ketu. Venus is strong here as it is in its own sign. It can indicate that he could have success in his career through creativity. He could be charming and have stable relationships. He could however have had problems with his reputation. He needed to be cautious not to get lazy in his professional life. He could live around well-placed individuals and circumstances. He could be prone to overindulging. Mars here indicates that his career success would come from a strong ambition and drive. He could have had interruptions/ breaks in his career. He was charming, persuasive and seductive. He had the ability to be a great sales person, who was a sweet talker. But he could also be rash and viewed as self-serving. He could be unfaithful. Ketu in the tenth house can indicate trouble with authority figures. It can indicate a career that is constantly changing. He was intelligent and able to adapt to changing circumstances. He may have felt that something was missing from his work and couldn’t figure out what. He could be ingenious in getting money and it could come in quickly but it could leave just as fast. For Bernie career success was a driving force in his life and consumed his time and thoughts. His profession was how he would define and label himself. When the ruler of the tenth is in the tenth it can indicate becoming famous for his life’s work. (I mean he did…I never said it was a good fame) Ketu and Venus are in the lunar mansion Krittika. He had a determined and tenacious will to achieve. He had potentials for ups and downs in life. He likely set his goals and expectations too high which could cause problems. He could also rise to fame, in this case not necessarily in a good way. Mars is in the lunar mansion Rohini shows that he could be a good communicator and smooth talker. He could be deceptive and a manipulator. He appreciated the finer things in life.

Lets take a look at some events in his life and see what transits triggered them.

Bernie was arrested on December 11, 2008. At this time, he was in his Jupiter Ketu dasha. Jupiter is the ruler of his eighth house of disgrace and Ketu is in his tenth house of career. On the day of his arrest transiting Jupiter had just entered his sixth house of work, Capricorn, where it is at its weakest state. This made the potential for much larger issues to arise especially given he was in Jupiter’s Dasha. Transiting Saturn ruler of the sixth house of enemies was within two degrees of his natal Neptune. This can show the end to the illusion of Neptune as Saturn can bring the death of it. Saturn was also in opposition to his natal Jupiter, ruler of the eighth house and the Dasha ruler. Transiting Uranus was within a degree of exact opposition to his natal Neptune. This can be unexpected happenings. Transiting Ketu, loss, was sending its energy to his natal Saturn in the eighth house of disgrace and humiliation. Transiting Rahu was sending its energy to his tenth house of career shinning a light on his career.

While charts have good and bad, we need to be aware that we do have the choice of which path we want to take. In Bernie’s case he chose to go down the more negative side of his chart.