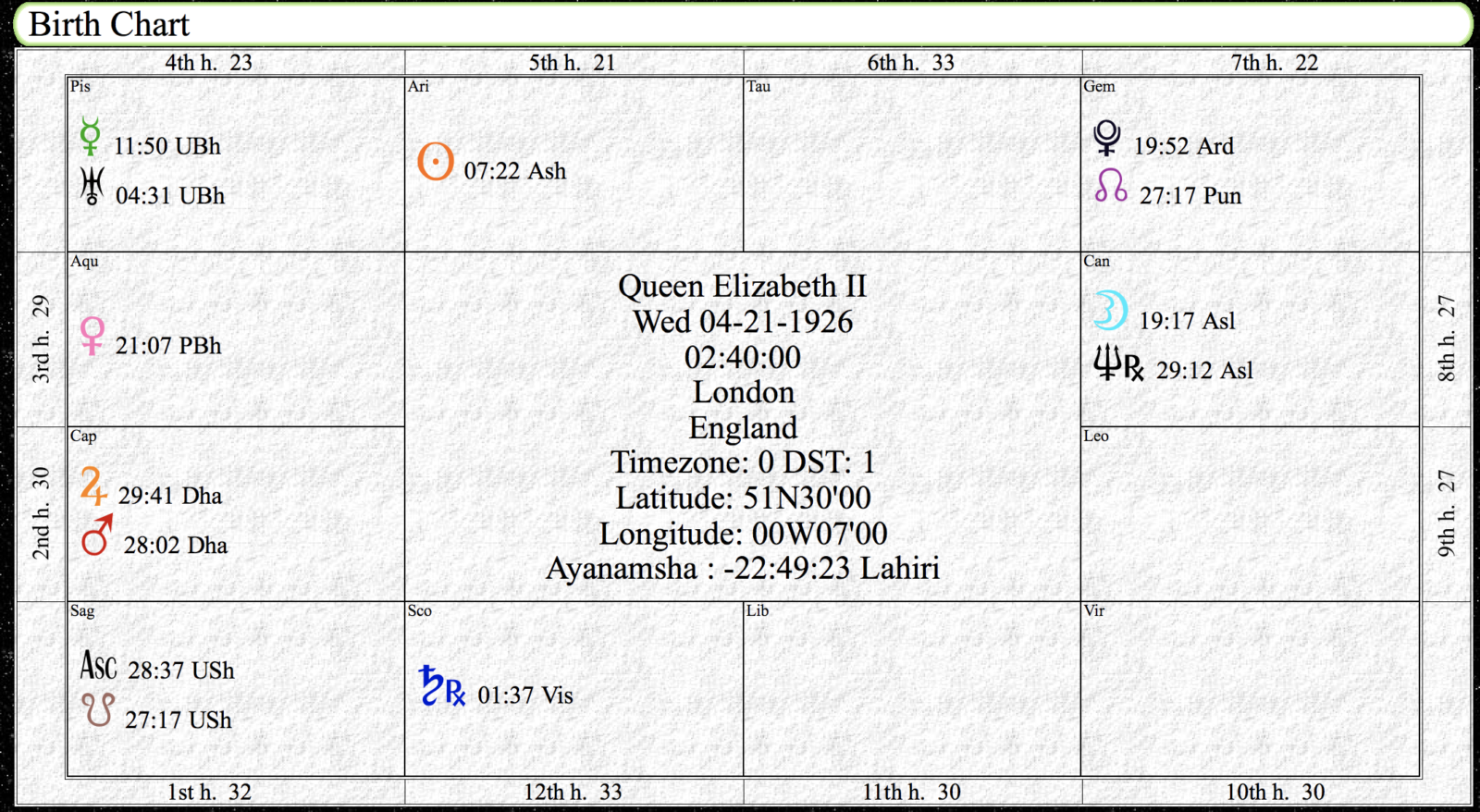 Her Majesty Queen Elizabeth II born Elizabeth Alexandra Mary Windsor on April 21, 1926 at 2:40am in London, England. At the age of 93 we are just seeing her begin to slow down. She is the longest-lived and longest reigning British Monarch having just celebrated 67 years on the throne. She is married to Prince Philip, Duke of Edinburgh and they have four children together.

Let’s take a look and see what we can see in her chart.

Elizabeth has her Ascendant in Sagittarius. Overall, she is someone who has a strong connection to her mother and a love of the home with an optimism and a love of life. She can be frugal with her money and her speech is strict. She has a passionate nature and may have had issues with her children at times. She has a sharp and keen intelligence. She likely has issues with friends and from what we can see she keeps her circle very tight knit especially in those she trusts. She works with her spouse as well as having business partnerships. She has a great respect and reverence for her father. In her first house she has the node of the Moon Ketu. This gives her an elusive quality and a feeling of being very hard to understand or know. She likely at numerous times throughout her life felt as if she doesn’t fit in anywhere. It can give a thin body especially in the younger years. Looking back at pictures of her we can see she was always thinner. She likely has explored many different philosophies in search of understanding. It can bring a separation from the father, whom she lost at the age of 25 just before turning 26. She is adaptable, has an action-oriented perspective and likely had many surprises in life. (I would say this last part was very true.)

Her ascendant and Ketu are in the lunar mansion of Uttara Ashadha which gives political or governmental leadership and says that she is bright, fun-loving, popular, devoted to friends, modest, interested in learning and enjoys reading to gain knowledge. She benefits through travel (clearly building diplomatic relationships is beneficial for her Country) going on frequent travels. She is devoted to her partner (married for 72 years and counting!)

In her second house, Capricorn, she has Jupiter and Mars. These two planets conjunct each other brings energy, enthusiasm and dynamism. It can bring good money and status and a position of leadership. It is important to note that Mars is at its exact degree, 28, of exaltation making Mars her strongest planet. With Mars in this position she has the ability to act quickly, high energy, generous, hardworking and it gives her the ability to resist disease and aging. Jupiter is at its weakest state and debilitated although not to the exact degree. This brings a desire to care for the masses, someone who follows the standards and who is practical. They bring an energetic family life, an active & forceful speaker, someone who is good with language, polite, and has good study skills. Jupiter and Mars are in the lunar mansion of Dhanishta which can give material wealth, ownership of property and real estate. As head of the royal family the Queen has a lot of real estate holdings all over England and Scotland.

Venus is in Aquarius which is Elizabeth’s third house. She prefers simple dress and desires stability it love. She also takes a structured approach to love and has a partner who is responsible. She is adventuresome and persuasive with good communication skills. This is highly important given her role. Venus is in the lunar mansion of Purva Bhadrapada. This says she can get money from the government (the royal family does), she can live a long life (93 and counting!) and that she could be born into a wealthy family. Check, check, and check! She can also be good at “reading” people – an important skill for her job. Now Venus can be used to look at Prince Philip as he is the marriage partner and thinking about what this lunar mansion indicates he too is living a long life (98…WOW!) and it says someone could marry into a wealthy family (I would say he qualifies).

In her fourth house of Pisces she has Mercury. Mercury is debilitated in her chart, this makes Mercury weaker so she may not get all the benefits that Mercury provides. She can be analytical, mentally probing, tactful and open-minded. We have seen under Elizabeth that many things have shifted from traditional customs. She allowed Charles and Diana to get a divorce which was completely unheard of for the Monarchy. She learns through books, is devoted to her family, and is knowledgeable. While my guess is from certain article I have read that at times her intellect may prevent her from expressing more of the feeling side of her nature.

Her Sun is in her fifth house, Aries. Her Sun is also exalted and very close to the exact degree of exaltation making it another strong planet in her chart. The indications that this position give is that her first born is could be a son, we know it was as Prince Charles is her first born, and that it gives a bright mind and clear perception with a good sense of self. It can make her children powerful and strong, as the fifth house is the house of children. I would say this is very true given one of her children is the future King of England. She has a strong constitution, is a leader, takes initiative, a sharp thinker, enjoys sport (she loves her horses), and it an authority figure. She believes in higher values. Interestingly enough her exalted Sun is in the lunar mansion of Ashwini which translates to the horseman. Her horses, as of 2013, have won over 1,600 races. Ashwini makes her a steady worker, intelligent, self-sufficient, a pioneer, courageous but also a stubborn side.

Next up her seventh house of relationships is in Gemini. This can give a partner who is restless, adaptable, intelligent, youthful and talkative. The other node of the Moon Rahu is located here. This can give a mind that is clever and may have unprecedented ideas and activities. Prince Philip benefits from nontraditional or foreign partnerships and can give a partner who is foreign. Interestingly Prince Philip was born into the Greek and Danish royal families. More to come on him in another article this fall!

Elizabeth has the Moon in her eighth house in Cancer. This makes the Moon strong as it is in its own sign. This gives her a sensitive, perceptive and emotionally responsible side. She can deal with family or emotional problems better than most. She can be forgiving but lives a comfortable life. She is supportive of others, while also receiving support from others. My guess is that she has an intuitive side but I have no way of proving this. It can bring a shy side to her.

Finally, Saturn is in Scorpio in her twelfth house. This gives an ability to work hard with a powerful focus and ability to get things done. She tries to remain cheerful especially externally. She followed the established path for her by becoming Queen upon her father’s death. She visits faraway places. She may not always get the best sleep and may sometimes feel that she is never fully rested. She may often feel isolated throughout her life and have difficulty making friends while also being self-conscious.

Let’s take a quick look at some of the yoga’s that Elizabeth has in her chart. Yoga means union or that which joins. This is when planets come together and brings more indications of what to expect in the birth chart. She has a Dhana yoga which produces material wealth and money. Mars and Saturn are Parivartana which means they receive connection through each other making them stronger when one or the other is activated. She has a Gaja Kesari yoga which translates roughly to “Elephant-Lion”, these two animals have great presence and rule the jungle. It gives her wealth, intelligence and virtue. She has a great business sense and financial prosperity because her Moon and Mars are opposite each other. She has a Vosi yoga which is where Mercury rises before the Sun giving her an attitude that is more futuristic, progressive, introverted and intuitive.

A quick at Queen Elizabeth’s Navamsha. The Navamsha is what we consider the fruit of the tree, yes, it can also be looked at as the spouse, but for this we are using it to see what manifests out of her birth chart. What we initially see when looking is that her Ascendant stays the same as it is in her birth chart giving great strength to them. She also picks up some strength in that her Moon moves to Sagittarius giving a double hit for everything. Where who she is is that she can sometimes get very in her head, as the Moon represents the mind. Jupiter is in the tenth house of career which says that family businesses will be handed down to children and that success comes from empowerment from family. It indicates a position with great authority and talents in leading. Saturn goes to the eighth house which indicates a long life. Wisdom is cultivated through life experience and the person is an old soul. Mercury is in the eleventh house which gives her superior communication skills, an open mindedness and popularity.

Queen Elizabeth is living an impressive life. It will be interesting to see how it continues to evolve in the coming years.

Be sure to check back for a look at Prince Philips life as given from the stars!