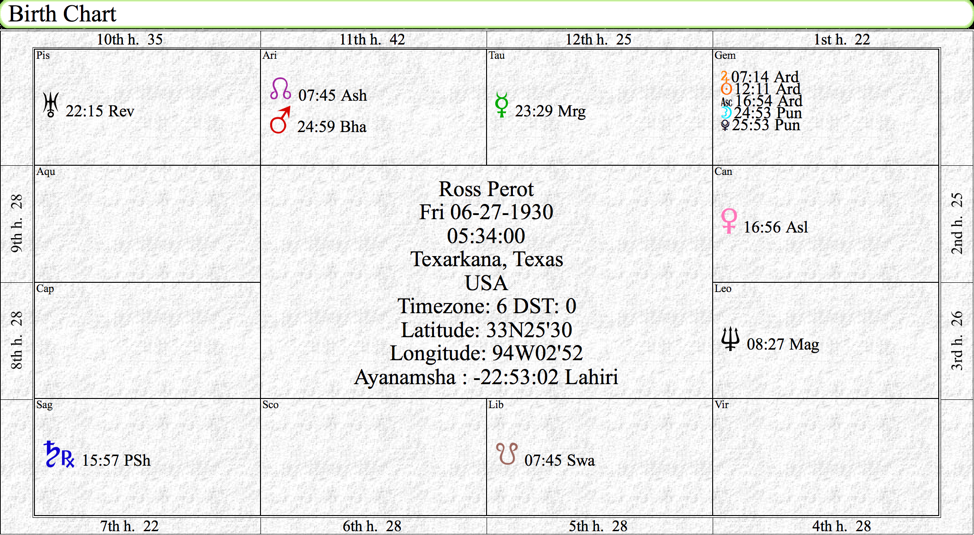 Ross Perot. Most of us have heard of him but some of you may not have. Born Henry Ray Perot in Texarkana, Texas on June 27, 1930 at 5:34am. He was the founder of two companies, Electronic Data Systems and Perot Systems. In 1992 and 1996 he ran for president on an independent presidential campaign and third-party campaign respectively. He had a long-term marriage and together they had five children. At the time of his death on July 9, 2019 he was worth an estimated $4.1 billion.

Let’s take a look and see what we can see in his chart.

A key point to note is that in Vedic astrology we look at a chart from the Ascendant, Moon and Sun to see the true strength and promise of a chart. All three are in Gemini for Ross which makes everything even stronger as a point of manifestation. Gemini people can be restless, adaptable, quick, intelligent, talkative and communicative. Gemini is a Mutable Air sign.

As mentioned Ross’ ascendant is in Gemini. His first house has a lot of activity as he has Jupiter, the Sun and the Moon all there. These placements gave him a powerful sense of self with a strong self-esteem. He had the ability to take command and was in power of many aspects of his life. He had a competitive drive and a strong desire to be number one. The Moon and Sun being in the same sign can take away some of the power of the Moon as it is more hidden and still in its new moon phase. With the Moon in his first house, however, his life took many unpredictable turns and there was constant change in his daily activities. We can see this in his different pursuits. Jupiter in his first made him inspirational and larger than life in personality but he wanted others to see it his way most likely. The ruler of his first house Mercury goes to his 12th house. He may have needed his privacy and solitude to regain and balance his life at times. His early life was difficult. As we know he lost his older brother at an early age. Mercury in the 12th gave him intelligence and a need to research and study.

Venus is in his second house. This is one indication that wealth can be acquired. As previously mentioned he was worth about $4.1 billion. This brought comfort through financial security and his married life and family brought joy to him. The Moon rules his second house and goes to his first house. This is another key indication that wealth will come to him. This placement also gave him self-esteem and a sense of power. He was able to clearly speak what was on his mind.

Ketu, one of the nodes of the Moon, is in his fifth house and brings a deep understanding and a compassion to him. His mind may have been more obsessive when thinking about ideas. Which we can see in that he was turned down 77 times before getting his first contract for his company Electronic Data Systems. There is potential that he may have felt he could never do enough for his children. His financial success came through his intelligence and the ability to contemplate and think things through.

Saturn is in his seventh house of relationships. This is Saturn’s most powerful house as it gains strength here. Saturn’s placement in the seventh house brings marriage longevity and marriage takes on a serious role in his life. We know it was important to him as he married Margot Birmingham in 1956 when he was 26 years old.

While Vedic Astrology does not really look at Uranus, Neptune and Pluto I think it is worth mentioning that Uranus is in Perot’s 10th house of career. This can lead to an unexpected career and constant changes in career. We can see he did change some. He went from the Navy to founding Electronic Data Systems and Perot Systems to running for President. Three very different types of careers. Since Jupiter rules his 10th house and goes to his first house. His career success was a defining aspect for him. He determines who he is through his work and relationships (as Jupiter also rules the 7th house). As a leader he had the ability to attract many followers. This was evident as he had the best showing of any independent candidate in any election.

Rahu and Mars are in his 11th house of great gains, gains from profession, big money and groups. Rahu has a very expansive quality and it can represent technology. He was the founder and CEO of two very successful technology companies. Rahu also can bring wealth, powerful friends and the ability to be influential in his community. Again, we see his influence through his two runs for President. Rahu is also in the Lunar Mansion of Ashwini which is a very pioneering and courageous nakshatra (lunar mansion). It could have made him stubborn and headstrong, restless and impatient with a tendency to rush off without planning ahead. Mars is in its own sign of Aries. This is another sign of the influence he could have on the community as well as his ability to realize many of his ambitions. Mars in Aries can make an individual active in government affairs, business-minded and give a respected position of authority. (Based on what we know I would agree that all three of those things were true, wouldn’t you?)

Let’s take a quick look at some of the yoga’s that Perot has in his chart. Yoga means union or that which joins. This is when planets come together and brings more indications of what to expect in the birth chart. He has a Durudhara yoga which means that his Moon is fully supported and he felt supported in life both receiving and giving back. He has a Gaja Kesari yoga or “Elephant-lion” yoga which can denote intelligence, wealth and virtues. He has a Ubhayachari yoga which means he has planets in both the 12th house and 2nd house from his Sun giving him prominence, power and wealth. He has a Dhana yoga which is wealth producing as the ruler of his 2nd house goes to his 1st house which brings the money to you.

We lost Perot on July 9, 2019 to leukemia. Was this in his chart? I would say yes it was. Rahu can represent cancer and Mars represents blood. When we think about leukemia we know it is a cancer of the blood and Mars is very strong in its own sign. Mars also rules the sixth house of disease. At the time of his death transiting Saturn was conjunct his natal Saturn in the 7th house. Saturn can indicate death and as it was in the 7th house a maraka (killer) house this was a big hint. Transiting Ketu was conjunct transiting Saturn and natal Saturn in this killer house and Ketu can be death as well as spiritual liberation. What is death if not a spiritual liberation from this life. Ketu can also be an indicator of cancer and with Saturn can show cancer being his cause of death. Transiting Ketu was also sending its energy to his natal Moon which rules the other maraka (killer) house.

Ross Perot lived a full long life. He was 89 at the time of his death. In those years he accomplished great things including graduating from the United States Naval Academy and serving in the Navy, two runs for President of the United States, founding two successful companies. His second company Perot Systems was purchased by Dell for $3.9 billion in September of 2009. He was a visionary, an entrepreneur and a legend whose influence will continue long past his death.

You can read more about Ross Perot at www.rossperot.com