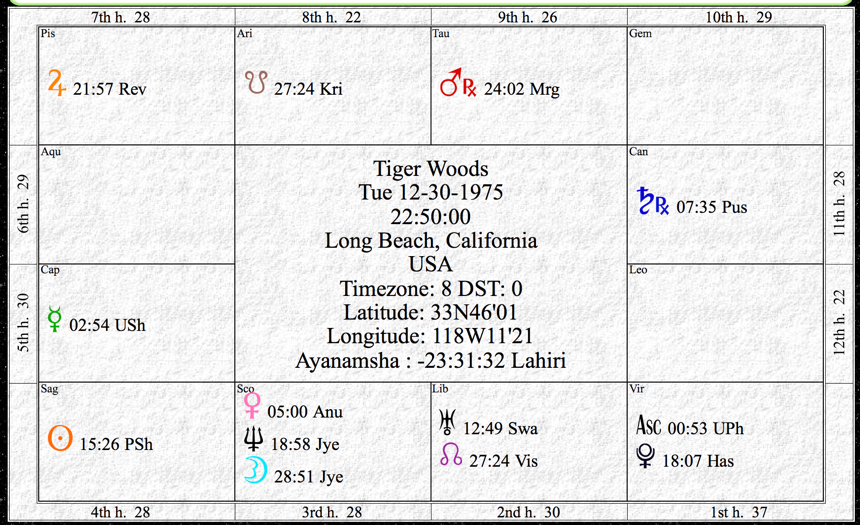 We can all remember when Tiger’s first marriage to Elin came crashing to an end. He admitted to having affairs and saying in a statement to the public “I thought I could get away with whatever I wanted to…I felt that I had worked hard my entire life and deserved to enjoy all the temptations around me. I felt I was entitled. Thanks to money and fame…” This alone shows his mindset and what could have led to the downfall but I want to look at the planets at the specific times to see what transits caused these.

A little refresher on Tiger Woods birth chart is as follows:

Basics of Tigers Chart. He was born on December 30, 1975, in Long Beach, California at 10:50 pm. This makes him a Virgo Ascendant. Both of his money producing planets Venus and the Moon, rulers of the 2nd and 11th houses respectively are in the 3rd house of sports, motivation, success through his own efforts and competition. The 3rd house is also a house of growth meaning as we age we get better. The Moon can also represent the masses and popularity, and his is in the 3rd house of sports. He is one of the most well-known golfers today. His Mars is sending its energy from his 9th house to his 3rd house, which Mars rules, giving the drive and ambition. This becomes even stronger because Venus and Mars are parivartana, meaning Venus is in Mars sign of rulership and Mars is in Venus’ sign of rulership, making them even stronger. Almost as if they were in their own signs. He has Rahu in his 2nd house of wealth meaning great amounts can be gained but may also be spent. Rahu is also conjunct Uranus in his 2nd house, which means money could sometimes be unexpected. Rahu sends its energy to both his 6th house of work and his 10th house of career at all times because of this natal position. Tigers’ natal Saturn is in his 11th house of great gains, gains from profession and money that comes in large amounts and it rules the 5th house, also another indicator of sports, and the 6th house, work, and challenges from competitors. The 11th house becomes a point of manifestation for him as his natal Jupiter sends its energy to the 11th house and then Saturn’s energy is there.

Ketu is in his 8th house which can be a house of disgrace and humiliation, secrets and scandals. Ketu in the 8th can be a hard position bringing fantasies and illusions to this house and causing him to think that affairs are ok. He also has Pluto in his first house indicating his need for power an ability to manipulate as well as a desire for sex. Pluto sends its energy to his 7th house and his natal Jupiter indicating he does not like others telling him what to do, especially his partners.

Let’s look at some of the scandals he has faced.

On December 11, 2009, Tiger Woods admitted to infidelity and issued an apology. However, with this statement he lost many endorsements and it was at this time that he decided to take and indefinite break from professional golf. So, what were the planets impact to his birth chart on this day? Ketu, an indicator of loss, had just recently entered his 10th house of career and was sending its energy to his 2nd house of money, 4th house of security and 6th house of work. This triggered the loss of sponsorships which is part of how he made his personal income (2nd house). It created the loss of security around his home life (4th house) and he lost a lot of work (6th house). Saturn was transiting his first house of Virgo and brought a spell of bad luck with it. Transiting Saturn was sending its energy to his 10th house of career, another indication that he had a separation from professional golfing at this time. Transiting Jupiter was debilitated in his 5th house in Capricorn bringing the “indefinite break from professional golfing.” Transiting Mars was in Cancer sending its energy to the 7th house of relationships bringing the mindset of self-righteousness that he could have whatever he wanted with no consequences.

Tigers divorce was official on August 23, 2010. At this time transiting Saturn and Venus were in his 1st house of Virgo sending energy, by opposition, to his 7th house. Saturn can bring separation and death. In this case the death of his marriage. Transiting Venus is debilitated in Virgo. Venus is the indicator of love and in its debilitated state can bring that loss of love and marriage. Transiting Jupiter was retrograde in his 7th house conjunct his natal Jupiter. This would bring a lot of energy around the relationship and could bring the end of the relationship as Saturn and Jupiter sending their energy to the same house can be a point of manifestation either good or bad (depending on the perspective). Transiting Ketu in the 10th house is sending its energy to the 4th house causing the loss of, or death of the happiness of his home life. Transiting Ketu’s aspect to his second house can also indicate his loss of personal wealth in the divorce settlement at this time.

On May 29, 2017, Tiger was arrested for driving under the influence of alcohol or drugs and ultimately in October pled guilty to reckless driving. He received a year of probation, was fined a small amount and ordered to undergo 50 hours of community service. On the day of the incident Mars, the indicator of accidents, was in Gemini sending its energy to his 1st house. Transiting Ketu was in his 6th house, Aquarius, the house of accidents, enemies, lawsuits and obstacles. Ketu brought the loss of the court case where he pleaded guilty. He was not going to win this one. Transiting Neptune was in the 6th house as well and the cause of the arrest was alcohol or drugs which is part of what Neptune stands for. Neptune is also denial and he had initially pleaded not guilty to the charges. This was made worse as he was in his Moon Dasha (main cycle) – Ketu Bhukti (sub-cycle) which activated his 8th house natal Ketu. His Natal Ketu and Moon are in a 6/8 relationship which is a difficult relationship and can bring transforming life events through suffering.

While Tiger has a lot of great things in his chart (see the initial article on his Masters win here) he also has some potential for transits to bring in some hard situations and growth opportunities through disgrace and humiliation.

If you want to know more about your own chart – strengths or possible obstacles to avoid/ be aware of fill out the contact form here and I’ll get in touch with you.

1 thought on “Tiger Woods – the Downfall of his Marriage and Career… Was it in his chart?”