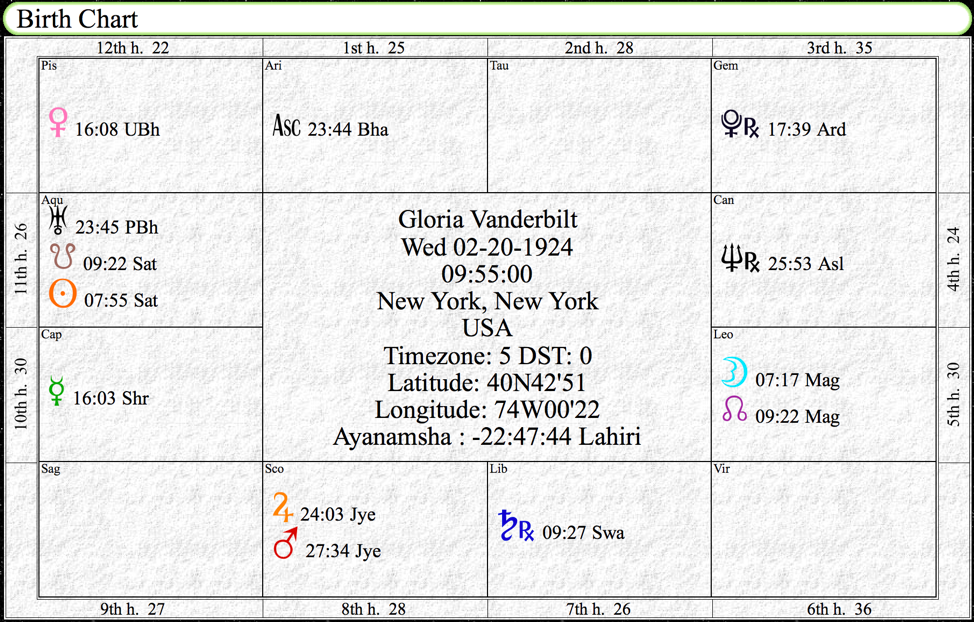 We have lost another Icon. Gloria Laura Vanderbilt passed away on June 17, 2019. An author, artist, actress, fashion designer, socialite, and heiress. She was born February 20, 1924, at 9:55 am in New York, New York. She lived to be 95 years old, but she did not have an easy life by any means. Her Father died in 1925, when she was just 18 months old, at which time she inherited a trust fund of $5 million equivalent to about $71 million in today’s dollars. Gloria’s mom and her paternal Aunt got into a custody battle. Her Aunt won custody. Throughout her life, she was married four times and had four sons. Her son committed suicide at the age of 23 in July of 1988.

Let’s do a brief look at her birth chart before we look at her death and the transits that may have triggered it.

We can see her Father’s death in two different places in her birth chart. To start the Sun, indicator of the Father, is conjunct Ketu, loss or death. Her Father died of cirrhosis due to alcoholism and Ketu can represent this particular disease. They are in the 11th house of great gains and boy did she get a lot of money in the form of a trust fund from her Father. The ruler of the 9th house, the Father, is Jupiter, and it goes to the 8th house of death. It is conjunct the ruler of the 8th house, Mars. Jupiter can also be an indicator of money, and being in the 8th house of money gained from others also shows Gloria’s inheritance from her Father.

One of her sons, Carter Cooper, committed suicide on July 22, 1988. The Sun rules her 5th house of children and is with Ketu, loss and death and Uranus, which is unexpected events. Jupiter is the other indicator of children, and it is in the 8th house of death with Mars, which itself can inflict death, as it is in its own sign, it is powerful.

Sadly, Gloria passed away on June 17, 2019. She had just recently been diagnosed with stomach cancer. At the time of her death, transiting Jupiter was retrograde, and it was sitting on top of her natal Jupiter in the 8th house. Jupiter also rules her 12th house of final liberation and loss. It was sending its energy to its own house and her natal Venus. Venus is a maraka, killer, planet for her. Transiting Ketu is sending its energy by its 5th aspect to her 1st house and her Ascendant to the exact degree of her Ascendant, 23 degrees. Transiting Venus was in Taurus her 2nd house, as mentioned earlier, this is a killer house for her, and Venus is the ruler of her 2nd house. Transiting Venus was at 16 degrees, and her natal Venus is at 16 degrees of Pisces in her 12th house of final liberation. Some astrologers argue that this can activate the planets as well. Natal Saturn, can indicate death and is in a maraka house being aspected by Ketu. Both are at 9 degrees. Natal Saturn is sending its energy to transiting Saturn in Sagittarius which itself is sending its energy to her 11th house and her natal Ketu.

When we look at the Navamsha, we see that Venus is again a maraka planet and it is on her Ascendant. Saturn is her Maha Dasha ruler right now, and it is in the 2nd house. Saturn can rule death, and being in a maraka house can be a trigger. Her Bhukti (sub dasha) is Rahu, which is in the 8th house. We look to Rahu’s dispositor, which is Mercury who is in the 7th house. Mercury is with Uranus, which can mean her death was unexpected. Transiting Ketu, loss and transiting Saturn, death, are in her 2nd house with her natal Sun, Saturn and Ketu. Transiting Moon just entered Sagittarius and then transiting Sun just entered Gemini, her 8th house, in her Navamsha.

There is so much that could be written about Gloria and her chart but for now I’m just going to leave it at this. I believe between her birth chart and Navamsha a lot came together to lead to her final liberation from this life at this time.